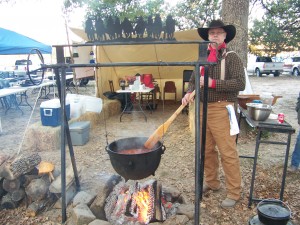 Information about the Contest
Wanna have some authentic East Texas fun and enjoy all the delicious homemade stew you can eat?  Then come to the World Champion Hopkins County Stew Contest the 4th Saturday in October in Sulphur Springs, TX.

Rules & Regulations
Each team must prepare a minimum of 10 gallons so that there is ample stew for judges and spectators.  For $5, spectators may visit as many campsites as time and appetite allow.  Some contestants use 20 or even 35 gallon iron cauldrons.  Last year, the 150 cooking teams that entered fed over 6,000 people.

Teams entered in the competition must start setting up around 4 a.m. Saturday to make the 10:30a.m. deadline for providing samples to the judges.  However, many teams have begun setting up as early as Friday morning and preparing supper foods such as beans, chili, Dutch oven deserts and more over their campfires for all of the many visitors that tour the stew grounds Friday night.  Last year, over 2,000 people were at the Stew Grounds Friday evening to visit, eat and reminisce about all of their favorite memories of the stew contest. 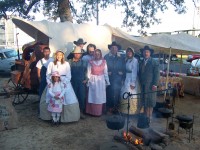 rved at 11:00 a.m. but visitors are encouraged to get to the stew grounds early so that they may walk the stew grounds and enjoy the atmosphere as gingham and calico-clad women stir simmering pots and bearded men in denim stoking glowing campfires.

The cooking competition began in 1969, but the roots of the dish date from the late 1800s, The county had approximately 100 schools back then and it became customary to celebrate the end of each school year with stew suppers that were cooked in iron pots over open hardwood fires.

There were no recipes.  Families just brought what they had and threw it in the pot.  The meat most likely was squirrel, and typically the most dominant vegetables were potatoes, onions, corn and tomatoes.

There is still no authentic recipe for Hopkins County Stew.  For the annual cook-off, contestants may use chicken or beef (no squirrel) and there are separate prizes for the best stew with each meat.

Vegetable choices are up to the cooks, who work in teams of two plus two helpers.  Most entrants emphasize the basics: potatoes, onion, corn and tomatoes. Chili powder is among the seasonings and the stews are often finished off with a little butter in homage to the county’s former claim to being the Dairy Capital of Texas.

Most cooks have a secret ingredient that they will keep secret until the day they die, or pass on the tradition to one of their children or grandchildren, so needless to say, no two stews taste alike.

For just $5, attendees will receive a bowl (for all the stew they can eat), along with cheese and crackers.  Then, if visitors want to take some stew home, they may purchase quart containers for $7 and enjoy the stew for many nights to come.

For more information, please contact the Hopkins County Chamber of Commerce at 903-885-6515.

Check back later on this page for registration!